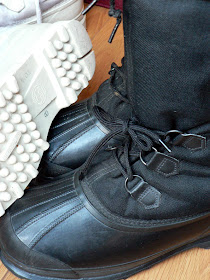 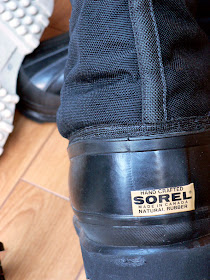 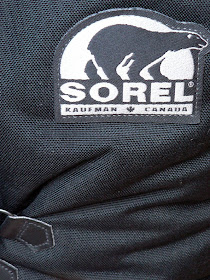 This coming winter I will be heading out in these monsters. They are older Sorel Glacier boots. Guaranteed to keep your feet warm in -76*C, and made in Canada by the Kaufman Footwear Co. Sorel Boots and a couple other slipper and work boot brands were all umbrella-ed under the Kaufman Footwear/rubber Company. Founded by Jacob Kaufman in 1907, after being a part in the two original rubber factory in Kitchener and having a falling out from both. Jacob was persuaded by his son Alvin Kaufman, who had worked at one of the Rubber plants, to organize another rubber company. This new Kaufman plant opened in 1908 on the corner of King and Victoria Streets, the plant was about 4 acres large and employed 350 people. 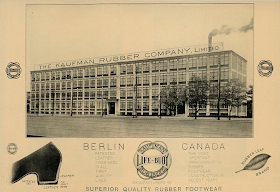 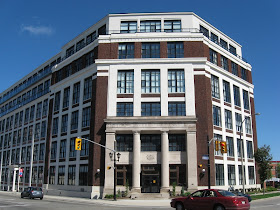 Jacob passed in 1920, and his son A.R. Became president until 1964. Kaufman Rubber made rubber clothing for the natural resources industry, and also firefighting and the food industry. They also made footwear and gas masks for the Canadian Forces in both World Wars. During the 50's as imported rubber goods started to hit the mainstream markets, Kaufman dabbled in Synthetic footwear, leather work boots, and pioneered slush molding waterproof footwear in PVC. Eventually in 1959 the Sorel line was released and would become Kaufman's most popular line. During this time and right up until their bankruptcy they created the boots we all love and are making a come back today, like "Caribou", "Manitou, "The Crusader", "Glacier" among other intimidating names. In 1964, the company changed its name to Kaufman Footwear Limited, perhaps to reflect its diversity of products as the company was not entirely a rubber manufacturer any more. That year, A.R. Kaufman’s son William H. Kaufman became company president.  After A.R. Kaufman’s death in 1979 Kaufman Footwear became Kaufman Footwear, division of William H. Kaufman Inc. In 1997 Tom Kaufman, son of William H. Kaufman, was named president, and business was "as usual". A couple years, and a couple of warm winters later sales had dropped dramatically for this iconic brand.  In April 2000, the Red Wing Shoe Co., signed a letter of intent to purchase Kaufman Footwear. No purchase price or agreement details were given. On July 20, 2000, Kaufman Footwear of Kitchener, Ontario, went into financial receivership after having been in business for over 93 years of rubber and boot making service. Then in September 2000 the Sorel name became a division of Columbia Sportswear Company in Portland, Oregon which still markets the boot.  Although they have unfortunately moved all production Overseas to China, While they still make many of there "Heritage" boots, sadly they lack the true heritage of being still made in Canada.

I found my boots on Kijiji, worn once. Any of the boots that were made in Canada are not hard to pick among the lots, As they all were marked numerous places to present that they were made here. Also Even though the Glaciers are the same design, you will notice that the "Sorel" label on the side of the boots now does not have Kaufman on it.  There are still plenty Canadian made Sorels around, and well worth seeking out. They made some of the best winter boots in the world.  And still hold up even if you can get them used.  Also FYI "Kamik", also a Canadian Pac boot brand still makes quite a few of the boots in Canada, and even have a Glacier replica.
Yak at 6:13 AM
Share