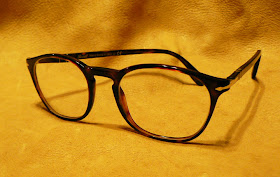 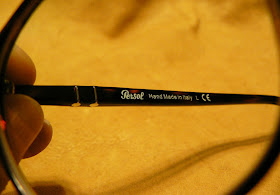 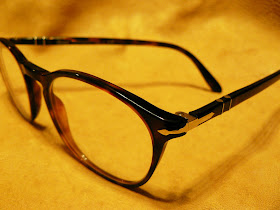 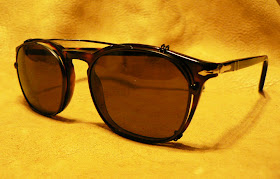 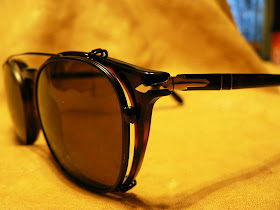 Formed in 1917 by Guiseppe Ratti, and the name from the Italian phrase "For the Sun"  was originally started to make glasses for pilots and sports car drivers. You probably seen them most worn on old photos of Steve McQueen, and sporting them ever so perfectly. They Were the first eye wear company to create a flexible stem (arm), this system is called the Meflecto System, its really pretty neat.  They are also known for their silver arrow in the corners and the use of cellulose acetate as the main construction material, and the fact that they are still handmade in Italy.
For the past two years I was wearing Ray-Ban Club-masters. When I bought them, my frames were made in Italy as well. Then on of the bolts that held the frame together stripped, and was replaces with a pair made in China. After a lengthy discussion with my optician, about how can Ray-Ban still charge the same amount for something made in China. he tried to find a older pair for me, but no luck. With  the New Year, new benefits and that means new glasses.  I saw these on their website and asked my optician to bring them in to try. They looked great, were light and they has really nice clip on green polarized sunglasses for the frame.  I am still getting use to my new prescription, but they look fantastic, and are of as we all know "of the highest quality".  I am sure you have seen the Persol "making of" video of the folding 714's, but here it is again. I can only assume my glasses were made with awesome jazz playing on the production floor. Fantastic stuff.